The Newtown Jets have returned to winning form in the Intrust Super Premiership NSW, with a 58-4 thrashing of an outclassed Newcastle Knights outfit at Cessnock Sports Ground.

After receiving an obstruction penalty from a mid-field bomb at the end of the game’s first set, a neat grubber kick from Newtown five-eighth Jack Williams saw centre Reubenn Rennie win the race to score the opening try.

Newcastle then dominated field position for the next 10 minutes on the back of a string of penalties, but could not convert the field position into points.

The Jets then counter attacked when in the 12th minute when a long break from fullback Will Kennedy saw winger Sione Katoa grounded just short of the Knights goal line in the right-hand corner.

On the next play, a long sweeping backline movement against the backpedalling Knights defence saw opposite winger Matt Evans dive over to score in the left-hand corner to double the visitors’ lead.

Six minutes later, Newtown extended their lead when Kennedy put through a grubber for himself from close range, pouncing on a fumble from opposite number Tom Cronan to score his first try. Kyle Flanagan landed his first conversion to extend the Jets’ lead to 14-0.

At this point, the Jets had the bit between the teeth and in the 21st minute, a long 50-metre break by hooker Blayke Brailey from dummy-half saw Flanagan take the inside pass to score under the posts. He duly converted his own try for a 20-0 Newtown lead.

By this stage, Newtown were breaking the Knights defensive line almost at will – and three minutes later a sweetly timed short pass from Williams put Scott Sorensen into a yawning gap up the middle of the field. The Jets skipper sent Kennedy bolting away for his second try next to the uprights.

The Match was then virtually decided seven minutes before half-time after Newtown interchange forwards Billy Magoulias and Wes Lolo combined to have Lolo grounded close to the Knights line.

Two tackles later Sorensen barged over from close-range to give the Jets a match winning 30-0 lead at the half-time break.

In a carbon copy of the early stages, Newcastle dominated possession and field position in the first 10 minutes of the second half for no result.

The Jets then extended the lead when they got some football. Evans picked up a fumbled Christian Hazard pass to stroll 20 metres untouched and score his second try. Flanagan converted to extend the visitors’ lead to 36-0.

Newtown had picked up where they left off in the first half; Rennie soon completed a left-side raid to score his second try for a 40-0 lead.

The Jets then continued the rout in the 62nd minute when another sweeping backline movement through the hands saw Evans complete his hat-trick.  Flanagan added the extras for a 46-0 lead.

Newtown’s thirst for tries continued when prop Braden Uele galloped over from another dropped Knights pass to bring up the Jets’ half century with 12 minutes left.  Flanagan’s conversion extended the lead to 52-0.

Winger Sione Katoa then finished off the Jets’ scoring with eight minutes left when he finished a right-side raid with a brilliant chip and chase for himself to score Newtown’s 11th and final try in the right corner. Flanagan nailed the conversion from touch – his seventh – for a 58-0 score line.

Newcastle at least had the final word with two minutes remaining when replacement hooker Tom Starling burst out of dummy-half, before sending prop Tyrone Amey over for the Knights’ consolation try.

Newtown will look to make it back to back wins when they take on Canterbury-Bankstown at Belmore Sports Ground next Saturday. The Knights – now last on the ISP table – will try to pick up the pieces against the Western Suburbs Magpies at Campbelltown Sports Stadium.

Yep, that's the biggest win of the competition so far for @NewtownRLFC!#IntrustSuperPremiership pic.twitter.com/uEVXPM0cyf 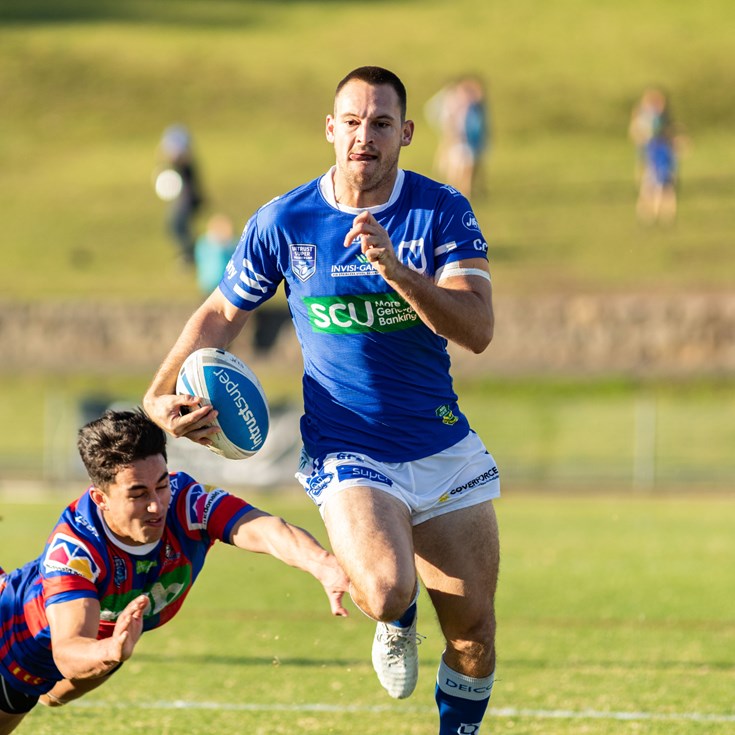