After kicking a 35-metre field goal to snatch a 19-18 win for Cronulla against Penrith, out-of-favour playmaker Shaun Johnson declared: "If there are any clubs out there that are after a halfback, I'm your man".

Just weeks after being told that he, Josh Dugan and Aaron Woods would not be offered new contracts, Johnson helped the Sharks overcome the loss of captain Wade Graham to consign the Panthers to back-to-back losses for the first time in two years.

"I got the news a couple weeks back and it obviously wasn't the news I wanted to hear," Johnson told Channel Nine after breaking an 18-18 deadlock with his 79th minute field goal.

"I had hopes of seeing my career out at this club. They gave me an opportunity three years ago. I have certainly enjoyed my time here. So, it's not meant to be; they want to head in a different direction, I really do respect that.

"But for me all I can focus on is coming out here, getting some games under my belt, and trusting that next year will take care of itself. Tonight hopefully helps."

The win was Cronulla's third in a row but celebrations were dampened by concerns for Graham, who was forced from the field in the 27th minute after reeling out of an attempted tackle on Robert Jennings and hyper-extending his left knee as he tried to maintain his balance.

It was Graham's fourth HIA this season and despite passing his assessment he was ruled out for the remainder of the match under the NRL's protocols as he had stumbled in backplay following the head knock.

"He suffered a head knock earlier in the year so with that in the back of our minds our medical staff were just extra cautious with Wade," Sharks interim coach Josh Hannay said.

"He is actually feeling really good so we will continue to take every precaution to get Wade right to get him back out there."

The Sharks led 18-0 at half-time but Penrith five-eighth Matt Burton inspired a stunning comeback by scoring two tries and laying on a third as the undermanned Panthers drew level in the 75th minute.

"I didn't think we were necessarily bad in that second half," Hannay said. "We just couldn't get the footy and when we did get it it was always coming off our own line.

"Credit to Penrith, they never quit. They kept coming and it took a high level of skill execution from a class player of ours to finish them off so we are glad to get the win."

Hannay said he had no doubt that Johnson would find another club next season, along with Dugan and Woods.

"It is what we need and it is also good for them. They are looking for a job next week so to speak so the better they can finish the year off for us the better it is going to be for them next year."

Moylan has too much pace for the chasers

With Origin stars Nathan Cleary, Jarome Luai, Isaah Yeo, Brian To'o and Kurt Capewell rested by coach Ivan Cleary after Wednesday night's series opener in Townsville, the ladder leaders slumped to consecutive losses for the first time since round 22-23 in 2019.

Blues 18th man Api Koroisau was placed on report twice, along with Cronulla centre Will Chambers, who has been touted for a recall to the Queensland team after their 50-6 loss in Origin I.

"He has still got a desire there, I think, to challenge himself against the best and Queensland are no doubt thin in that area," Hannay said of Chambers.

"One thing Will has always been good at is defensively he is physical out there so he may come into calculations and he will back himself if he does."

The Sharks began their first-half blitz in the ninth minute when five-eighth Matt Moylan started and finished a 90-metre try after sending winger Ronaldo Mulitalo racing down the eastern touchline with a long pass near his own line and backing up on the inside to run the last 55 metres.

Johnson scored next after second-rower Briton Nikora fielded a kick from the star playmaker and threw a one-handed overhead pass for his Kiwi team-mate to stroll over out wide.

A spectacular backline shift involving Johnson, hooker Blayke Brailey, Moylan, fullback Will Kennedy and Chambers before Mulitalo finished to extend Cronulla's lead to 18-0 at halftime, but Penrith dominated the second half.

Burton has a double and Penrith are right back in it

Burton started the fightback when he stepped past Kennedy and Toby Rudolf to score in the 59th minute.

The Canterbury-bound five-eighth then laid on a try for replacement Izack Tago with a deftly placed kick behind the Cronulla defence in the 70th minute before crossing for his second two minutes later.

Centre Stephen Crichton missed the conversion but he made no mistake with a 75th minute penalty goal to level the scores before Johnson snatched victory with a long range field goal. 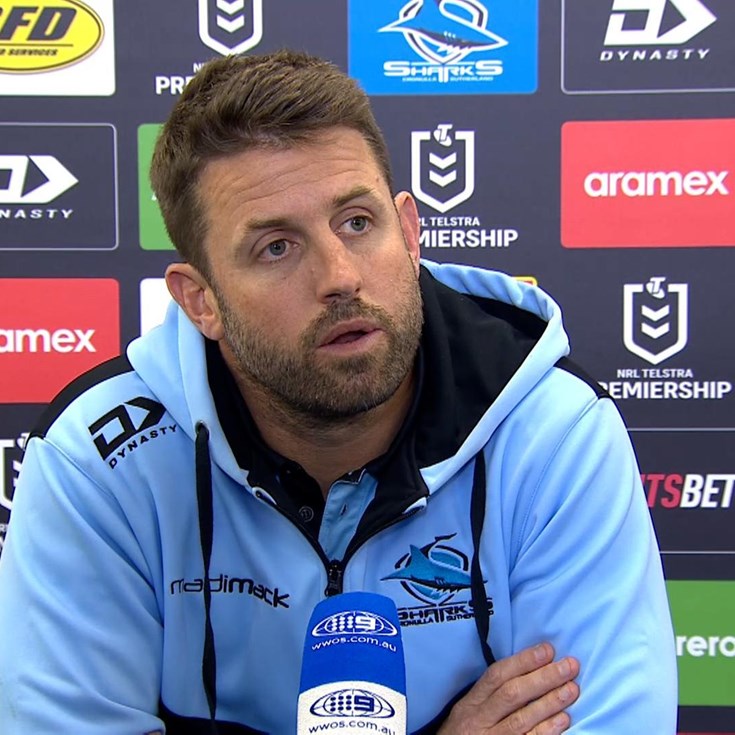