Matt Moylan's hamstring "strength numbers are through the roof", according to Sharks coach John Morris, who says the injury-plagued fullback just needs to string some games together to exorcise his "mental demons".

Moylan, having only played twice this season after missing 14 matches last year with soft-tissue problems, will be assessed on Sunday morning to see whether he can return from hamstring tightness to face the Bulldogs at Bankwest Stadium.

While conceding that missing so much football "is a concern for Moyza", Morris believes the 29-year-old can still "hopefully have a big year" as Cronulla look to overcome a 1-4 start to the season.

"The good thing is we actually have changed his [training] program and he's doing a lot more strength work," Morris said on Saturday.

"As with hamstrings, you've really got to get the strength into your legs and a lot of that comes from your eccentric Nordic-type training. We've managed that a lot better this year than we did last year. His strength numbers are through the roof."

Morris said Moylan could have played in last week's loss to the Dragons but the club erred on the side of caution.

"We've had this go against us in the past last year. He flagged a bit of tightness and sort of rolled the dice and played and he ended up pulling one in a game," Morris said.

"We're not going to be burnt with that again this year and I think it was smart last week not playing him ... Hopefully that decision will be justified with an 80-minute performance from him this week."

Goodwin debuted for the Sharks in 2007, playing nine games in black, white and blue, before moving to Canterbury.

"That's a great story [to have him back]," Morris said.

"He brings back a lot of experience to the club that we lost in Josh Morris. Brys played a lot of left centre, as did Josh, and he can also play on the wing. I think he brings something like 170 NRL games experience which is crucial for us."

Morris branded the Bulldogs clash a "must-win" for his 13th-placed team and said he was looking for a "much more urgent performance based on our defensive commitment".

"It's important we don't get too engulfed in where we are on the ladder, because there are still some parts of our performance that have been good," Morris said.

"We've got to encourage the boys to do more of that. Importantly, we've got to fix our ball handling. I think we're down the bottom as far as completions go, we're giving away far too many penalties and it's just putting too much pressure on us defensively."

Morris said the onus was on the team as a whole, rather than just halves Chad Townsend and Shaun Johnson, to provide direction.

"It's pretty hard to be a half when you're turning over that much footy amongst the team," he said.

"I'm looking forward to those boys being able to manage our game much more effectively this week on the back of higher possession and higher completion rates. I'll judge them on the back of that."

Star Sharks under the microscope after Dragons loss

The Sharks have extra motivation to play well with it being Beanie for Brain Cancer Round in support of the Mark Hughes Foundation.

Promising Cronulla prop Fine Kula, 21, was forced to give away his NRL dream earlier this year after being diagnosed with medulloblastoma.

"Fine dropped into training through the week and the boys were able to say hi to him," Morris said, encouraging fans to support a GoFundMe appeal for Kula.

"We're certainly behind Fine every step of the way and hope he's doing well through his fight." 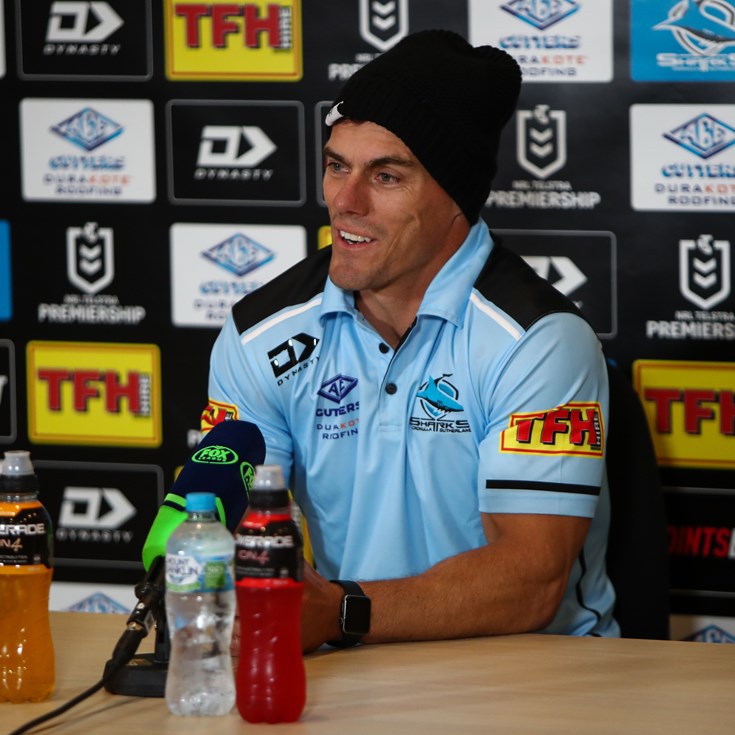 Morris: We couldn't afford to walk out without the two points