NSW Origin second-rower Wade Graham was going to play alongside Johnathan Thurston at North Queensland but Paul Gallen convinced him to join the Sharks.

Gallen has been the beating heart of the Sharks for much of his 19-year career and on the eve of his retirement it has emerged that he has contributed much more to the club than his remarkable statistics demonstrate.

However, the 38-year-old has also been someone teammates could turn to when they needed advice during the tough times and a key recruitment figure as they built towards the 2016 premiership and beyond.

Gallen: I know it's time

"He was really hands on with recruiting me to the club," said Graham, who was a 19-year-old five-eighth with Penrith when he signed with the Sharks for the 2011 season. "It was a big vote of confidence, he was the captain of Cronulla and NSW, and vice-captain of Australia.

"I was learning towards North Queensland. The opportunity to learn outside JT. I had to weigh a lot of things up. Galza's phone call sparked me into coming to Cronulla. It was a clincher for me. It hasn't always been smooth sailing but in the end I don't regret a thing."

Woods had played alongside Gallen for NSW and Australia and when he was told by Canterbury midway through last season he was free to find another club, the Sharks captain called him.

Morris tells a similar story after also becoming a victim of the Bulldogs' salary cap squeeze.

"I've lived in the area for the last 10 years, and whenever I've seen him he has been trying to get me across the whole time," Morris said. "It worked out that I'm here this year and one of the main reasons for coming across was to play alongside Gal."

Woods said: "He rang me up and said 'what's taking you so long'. He said 'c'mon mate, you need to play finals footy'."

After making the switch before last year's June 30 transfer deadline, Woods played in the finals series for the first time since his debut season with Wests Tigers in 2011.

It is a feat the Sharks have achieved every year since 2012, except 2014 as the club struggled to cope with the fallout from the supplements scandal that resulted in 12 members of their 2011 squad accepting season ending suspensions and coach Shane Flanagan serving a 12-month ban.

"It wasn't a great time," Graham said. "It tested a lot of people to see what they were made of. Gal was a rock, Flanno was strong. They were the cornerstone of the strength. I'm glad we came out of the other side and had happier times.

"Gal has easily been the biggest influence on my rugby league career. The way he has led, the way he has played, his toughness. I've got a lot of great memories and there's been a lot of hard times too.

"He has done everything in his career and I've been fortunate enough to play with him every week. He has been a guy who fills you with confidence when you're in the dressing sheds getting ready to play."

Woods: He's one of the best leaders I've played with

Just as he did when he phoned Graham nine years ago about joining the Sharks.

"He sold the club well and gave me confidence in myself," Graham said. "His values and what he was talking about mirrored up in my head."

Fullback Josh Dugan said Gallen was also one of the reasons he signed with Cronulla last year.

Dugan made his NSW Origin debut as a skinny fullback in the opening match of the 2011 series, in which Gallen played the full 80 minutes as a middle forward, and he was keen to play with him on a regular basis.

"He has been at the forefront of the club for a while now and he has always been that attraction to come and play with one of the toughest in the NRL and that sort of thing," Dugan said.

"I think he kept the Sharks on the map, he has done a lot for the club and I am really looking forward to going out there, having a battle against Canberra on Sunday and hopefully having a win.

"He's been a great role model for the club and he doesn't say too much about it but in the back of our minds we are all looking to send him out a winner here."

Besides being Gallen's last home match, it will be the final NRL game at their home ground for two years as the Sharks are set to move to Kogarah while their leagues club and surrounding precinct is redeveloped.

The match is a sell-out and a Cronulla win should secure the club a place in the finals and the opportunity to send Gallen out with a second premiership.

"It's going to be emotional for Gal and the supporters," Graham said. "It's a big game. There is no shying away from it, you need to embrace it.

"Gal has been here longer than some of these boys have been born. Gal has been playing longer than half of them have been alive. It's the end of an era. The footy story ends but the relationship will last forever." 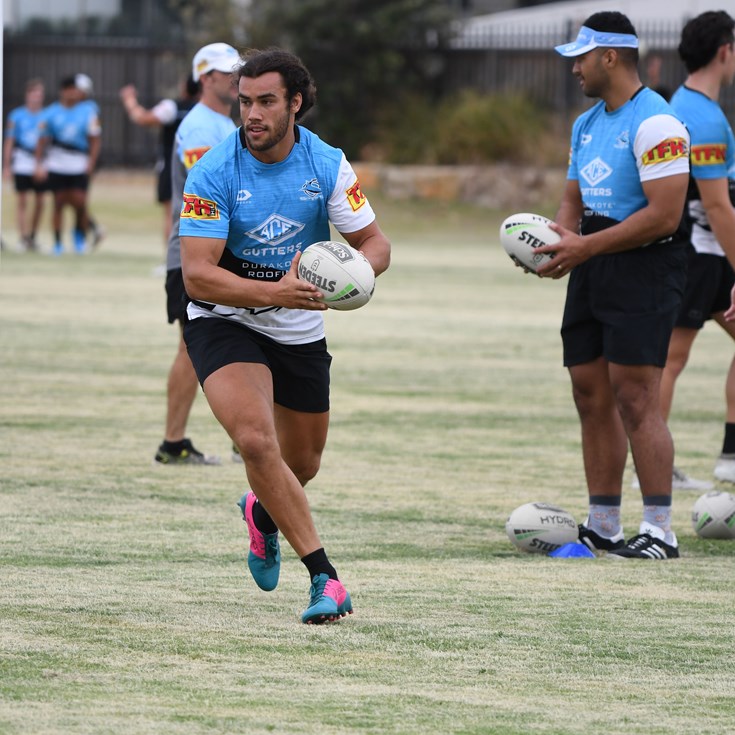