The Sharks have fought off a valiant Bulldogs side to extend their winning streak to five matches, running out 22-16 victors at Southern Cross Group Stadium.

Bolstered by the returns of captain Paul Gallen and fullback Josh Dugan, the Sharks were made to work extremely hard for the two competition points in front of 14,004 boisterous fans on a picturesque Sunday afternoon.

In-form prop Andrew Fifita was again outstanding, running for a team-high 171 metres, while Gallen was his usual workhorse self in his comeback from a knee injury with 18 carries for 145 metres.

Cronulla dominated the early stages of the match but gifted Canterbury a great chance when Dugan spilled a spiraling Moses Mbye bomb 40 metres out from his own line. The away side took full advantage of the field position with veteran centre Josh Morris slicing through on the left edge to score.

Mbye's conversion attempt was off target and Canterbury had an early 4-nil buffer.

But the Bulldogs' joy was only brief, an error in their first set after points inviting the Sharks to strike back. They did just that through winger Edrick Lee, who produced a powerful effort to touch down just inside in the south-eastern corner post.

Chad Townsend made no mistake with the conversion to put the Sharks ahead after 15 minutes.

A penalty then gave the Sharks another opportunity to attack the Bulldogs' line. It didn't take long for Cronulla to capitalise, some Matt Moylan magic setting up a sensational try for winger Valentine Holmes. Moylan received the ball on a sweeping run and put in a perfect cross-field kick that landed in the unmarked Holmes' lap.

Townsend couldn't add the extras from the sideline and the score remained 10-4 in the Sharks' favour.

The plucky Bulldogs refused to give in, heaping pressure on Cronulla's goal-line defence for four straight sets before finally breaking through thanks to a sublime airborne finish from winger Brett Morris.

Mybe was wide with the conversion, leaving the Sharks hanging to a 10-8 lead after half an hour of action.

Ill discipline cruelled Cronulla, with a succession of penalties handing the Dogs a mountain of possession inside the Sharks' red zone. Unable to find a route through some excellent scrambling defence, the Bulldogs elected to take a shot at goal after another penalty.

This time Mybe was successful with the kick, locking the scores at 10-all going into half-time.

It appeared the Sharks had pulled off the perfect start after the break when Jayden Brailey pounced on a wayward offload from Mbye in Canterbury's in-goal area. However, the video referee found a slight knock on from the hooker and the on-field decision of try was overturned - much to the chagrin of the vocal home crowd.

But Cronulla wouldn't be denied for much longer. In the 50th minute, centre Jesse Ramien split defenders left and right on his way to scoring a magnificent try under the posts. Townsend easily knocked over the kick and the Sharks were back to a six-point margin.

Canterbury soon responded with Brett Morris stretching out after a smooth backline move to claim his double. Mbye copped a heavy razzing from the crowd as he lined up the conversion from the sideline and missed, the Sharks in front 16-14 heading into the final 20 minutes.

With the match in the balance, a determined charge from Matt Prior saw the front-rower carry three Bulldogs players across the line. Townsend nailed the conversion to push the Sharks out beyond a converted try.

Bulldogs halfback Kieran Foran looked to have created a grandstand finish when he slipped through the Sharks' defence and seemingly slammed the ball down on the chalk. But on closer inspection from the video referee, Foran lost the ball short of the line and the Sharks survived the scare.

A very late penalty to the Bulldogs allowed Mbye to kick a penalty goal and reduce the gap to six points, giving Canterbury the faintest glimmer of hope. It wasn't to be for the Dogs, an Mbye error with the siren sounding sealing the deserved win for Cronulla.

Now within striking distance of the top four, the Sharks take on Newcastle at McDonald Jones Stadium next Sunday. 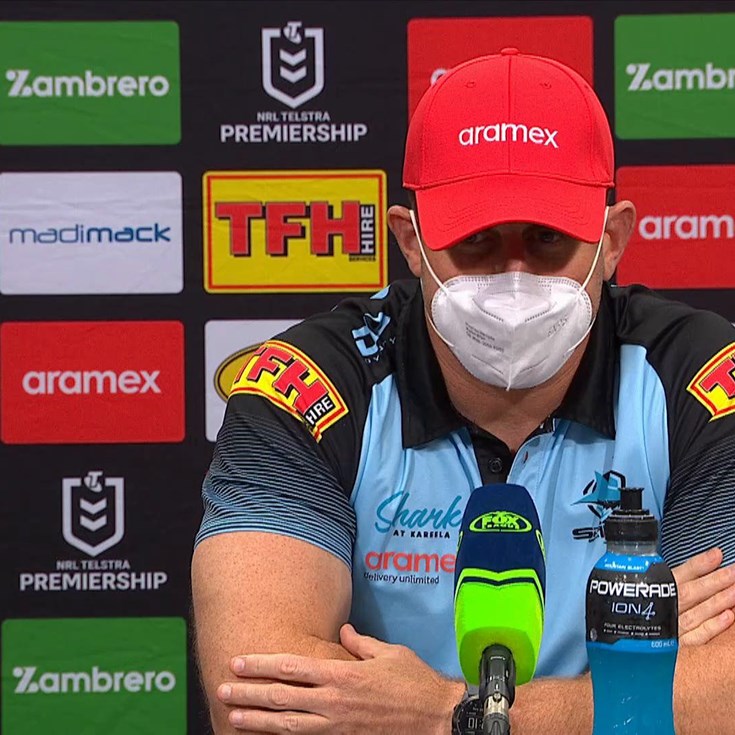 Raiders down Cronulla on the Gold Coast