The consensus, after the dust had settled and the controversy over the 33-penalties awarded had died down, was that the 14-4 win over the Storm was a step in the right direction for the Sharks.

Keeping the defending premiers try-less, the first time since the Sharks did it to the Storm back in round nine of 2017, was an achievement in itself.

Defence was the order of the day, with the Sharks now having conceded just one try in their last 160-minutes of football.

However, while the defence was strong, the Sharks attack didn’t manage to fire on all cylinders, the stop-start nature of the contest perhaps contributing to the stuttering play when in possession from both sides.

But in the final washup it was a win for the Cronulla side, their second in a row, setting up a clash with the Roosters where the victors will bank the all-important two competition points and continue their push towards the pointy end of the NRL ladder.

In his weekly media call, Sharks Coach Shane Flanagan was showing their opponents the utmost respect, despite the fact the Roosters left themselves open to criticism with a lacklustre loss to the New Zealand Warriors in round four.

Putting that below-par performance aside, Flanagan is aware of the abundance of potential match-winners the Roosters squad possesses.

“It’s always a tough game, we’re hopefully looking at a 13,00-15,000 crowd and it will be a typical Sharks v Roosters battle,” Flanagan said. “Their strengths are (Cooper) Cronk, (Luke) Keary, (Blake) Ferguson and their outside backs and they’ll definitely present some new challenges tomorrow night.”

While defensively the Sharks will again need to be on their game, the addition tomorrow night of playmaker Matt Moylan will certainly bolster the teams’ attacking options.

Missing now for two weeks with hamstring and knee issues, Moylan is back approaching full fitness and will be a key component of the Sharks team to tackle the Roosters.

“He started the season in reasonable form but he battled with injury,” Flanagan explained.

“It was his knee, causing problems with his hamstring, but he’s back now fully fit and he trained strongly today without any strapping on his leg.”

Otherwise the inclusion of Josh Dugan at fullback, also following a leg injury, shapes as the only other change to the team which beat the Storm. Dugan has missed the last two games.

Jack Williams and Kurt Dillon have been omitted from the 21-man Sharks squad as selected on Tuesday, with the team to be trimmed down to the final 17 one hour before the 6.00pm kick off tomorrow night. 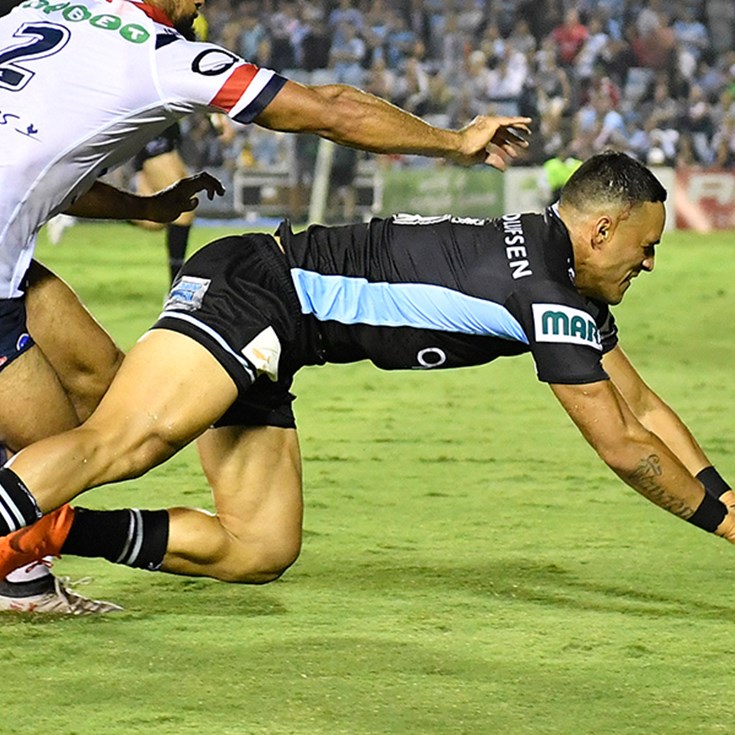 Round 5 l In Pictures